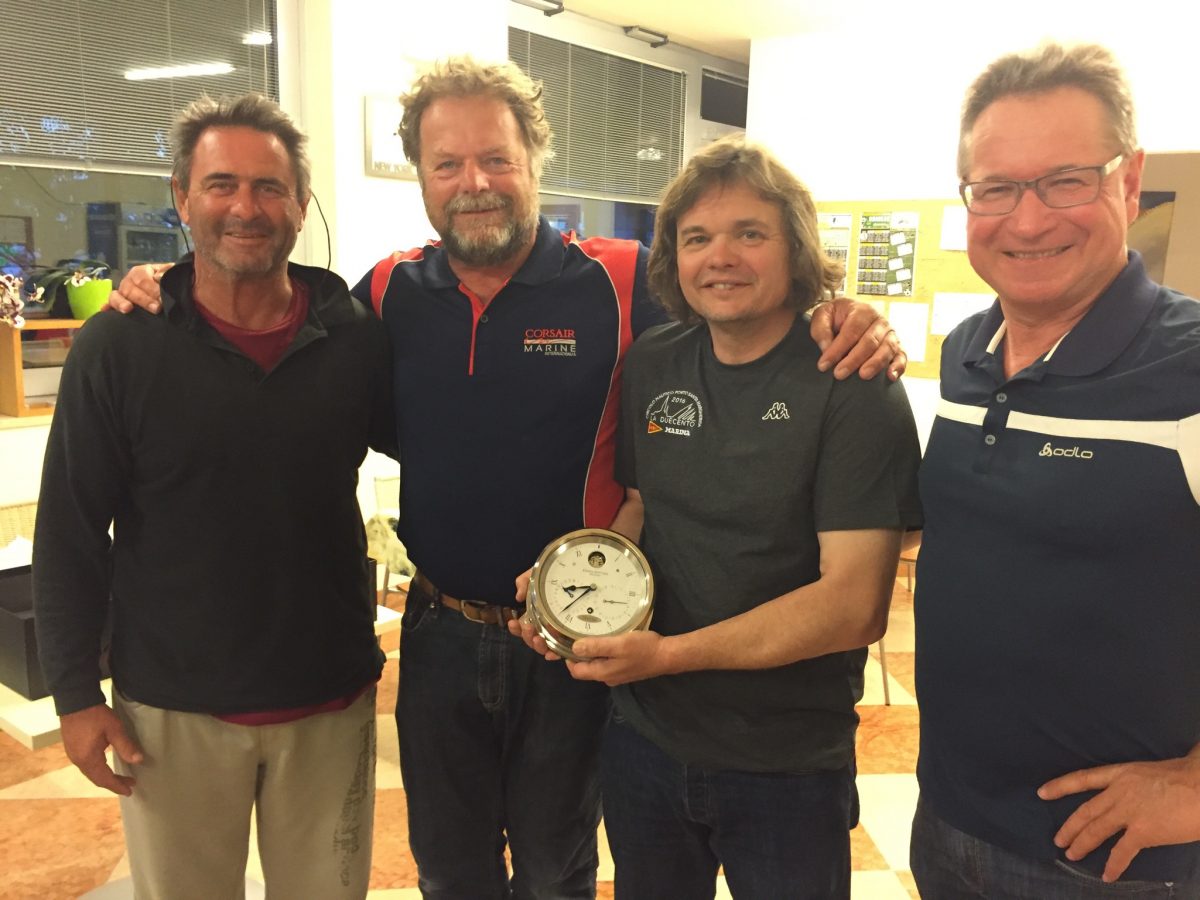 by Werner Stolz
The CEMC 2016 – Corsair European Multihull Championship – race has been successfully completed.
We were 7 trimarans at the start, two didn´t manage to come to Italy.
For the trimarans the race began with the gathering of all boats at Marina Sant Andrea on Wednesday, 4th May. In the evening we held the welcome party at the Marina Restaurant “Ma.ri”. The party was attended by all crews and nearly all Sponsors: Zam Bevan-Corsair Marine, Andreas Hofmaier-SAYG, Richard Mueller-Erwin Sattler and the Marina Staff from Marina Sant Andrea.
For Thursday a short feeder race from Marina Sant Andrea Harbor entrance (called Porto Buso) to Caorle, the start of the race (distance 18nm) was planned. The start of this “race” was on 11:45 with a moderate NE-ly breeze. This was a good opportunity for all boats to check their downwind sails and organize the crew work. After three hours all boats arrived at Caorle, Marina 4. The CEMC was hosted by the CNSM-Circolo Nautico Porto Santa Margherita at Caorle. The CNSM organizes “La Duecento” a 200nm race since 22 years. The race course is in the northern adriatic from Caorle (Gulf of Venice) to Grado (Gulf of Trieste) to the Island of Susak (Croatia) and back to Caorle. The start is on Friday around noon, the time limit is on Sunday at 20:00.
This years race saw 77 boats at the start, the 7 trimarans were racing under the MOCRA rule. The start saw hardly any wind as the Sea Breeze had not yet arrived, but after some time it started to fill in and the boats started moving and we saw spinnakers and screachers on all trimarans. The safe water mark off Grado was passed late afternoon, Lazy (CRUZE 970XL) of Richard Mueller was first boat followed by Silver Chiller (Corsair 37RS) of Georg Kretz (with Zam Bevan as part of the crew), SAYG I of Andreas Hofmaier, Hikari (Corsair 28EC) of Berk Plathner (with Werner Stolz, Corsair Germany as crew) and Triohe (F-9AXR) of Stefan Lichtmannegger. After the passage of Grado the wind nearly completly died and a long night with a patchy land breeze began. The next morning saw all trimarans near the southern tip of Istria (Croatia) within 10nm and Trihoe leading the pack. Now the crossing of the Kvarner bay down to the Island of Susak began. The expected Sea Breeze was 4-8kn from SW and it was already late afternoon on Saturday when the first trimaran Lazy turned around Susak. Overall the trimarans did a good job against the mostly much bigger monohulls, Lazy  on 11th, Silver Chiller 14th, Hikari 16th, Triohe 18th and SAYG I 22 boat out 77.
Now the way back to Caorle began, it was already Saturday evening and some boats retired because they were afraid of getting back too late on Sunday and for work on Monday. The following night saw again a weak breeze from land turning later to SE as predicted. When the sun came up this SE wind started to build to 14kn and all boats were flying their downwind sails. To the surprise of all trimarans Hikari was now leading with SAYG I, Silver Chiller and Triohe not far behind. Now with only 25nm from the finish the race for line honors was on. Hikari was fighting hard but in the end Silver Chiller came out of the mist and crossed the finish line 4 minutes ahead of Hikari, Triohe came third and SAYG I fourth on elpased time, but Line honors went to Silver Chiller. All trimarans arrived within 10 minutes after 200nm and more over all of us were under the first 20 boats of the whole fleet.
In the evening the rest of the Trimaran fleet met at Marina Sant Andrea for dinner and price giving.
More informations can be found here:
For live tracking and playback: http://www.sgstracking.com/live/laduecento2016.php
Re results for all classes: http://www.cnsm.org/files/2016/200/classifiche_200_2016.pdf
Facebook with many more photos: https://www.facebook.com/cnsm.caorle/photos/pb.498860100227278.-2207520000.1462879307./979649455481671/?type=3&theater 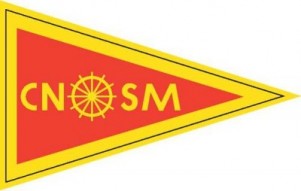 „We’re working on NOR of La Duecento and La Cinquecento. There will be an important change starting from this year, ISAF cat 3 OSR section 6 says ‚When there are only two crewmembers, at least one shall have undertaken training as in OSR 6.01‘.

Please inform your owners about it.“ 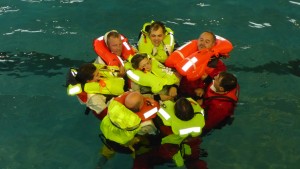 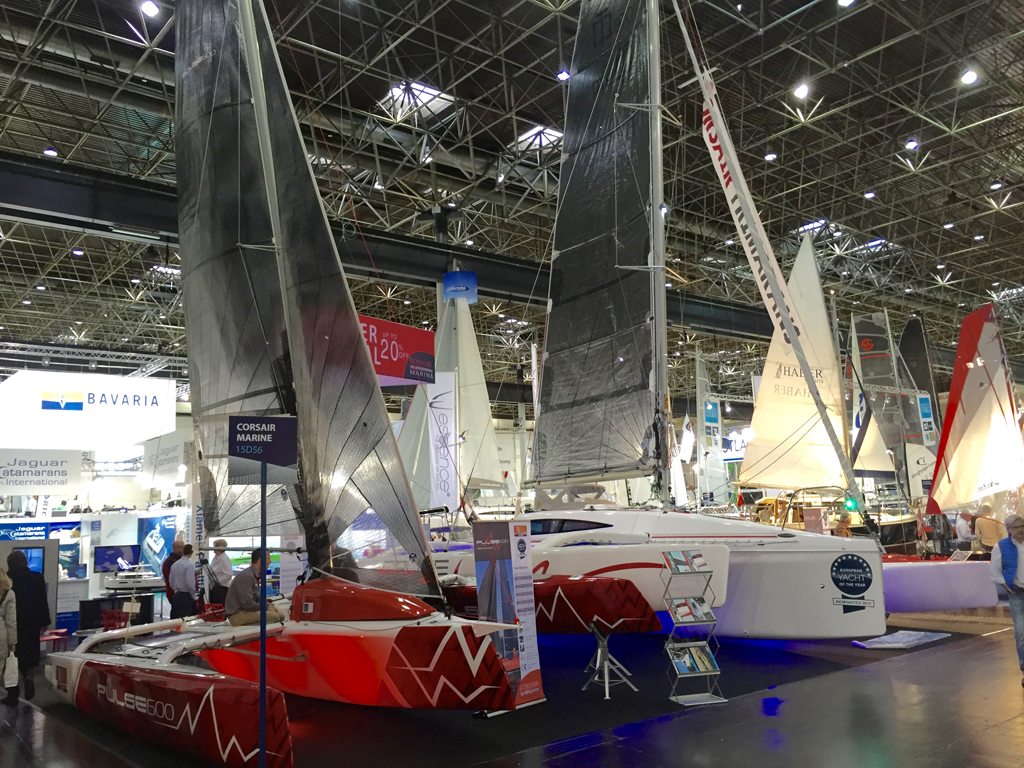 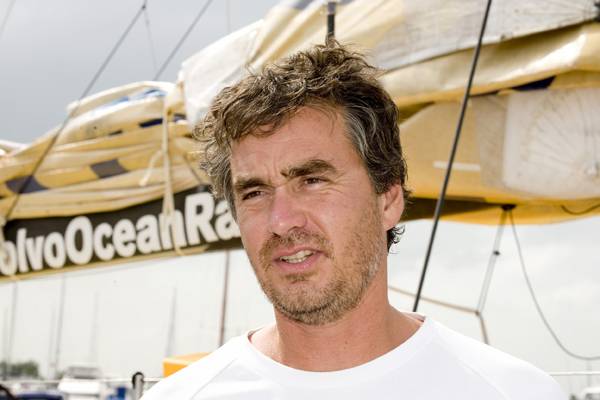 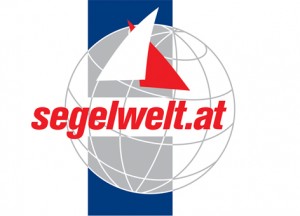 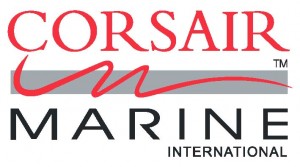 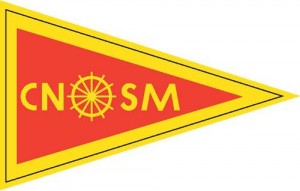 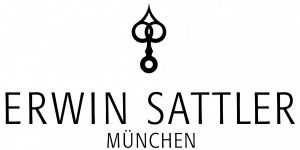